It was back to business in the District!  The streets were treated with salt to melt the snow, in time for Tuesday night’s 5E Advisory Neighborhood Commission meeting.

With a lengthy meeting agenda, Commissioner Bradley Thomas called the meeting to order at 7:04 pm through the microphone.  After roll call, with many motions to approve on the agenda, the election of Officers was lead by Commissioner Sylvia M. Pickney moving to select the following:

The motion was agreed to select the Election of Officers by ANC Chair.  To ensure the ANC doesn’t create liabilities for themselves the Chairman suggest considering Ms. Brooks status of Virtual Assistance as an independent contractor.  Moving right along the agenda, next up, the Public Safety report.  Which revealed a robbery at Compass Coffee, with a victim’s laptop being snatched.  A concern coming from a resident of the community was “has the transition taken place?”  Yes, last Thursday, January 10, 2019, according to the 3D officers.

The lengthy agenda included the Bloomingdale Historic District with development site located at 1634 North Capitol Street, NW, which was presented by Commissioner Lewis in support of the historic building.  The project is currently in review before the Historic Preservation Review Board.  The plans have been approved by the zoning commission, however the project development team must go before the ANC and community before receiving their building permits.  The Historic Preservation Office (HPO) encourages ANC participation in the historic preservation review process.  The Bloomingdale Civic Association did raise a concern about the amenities package that came with the zoning order.  Despite the developers having wide support, they find themselves back in the historic portion of the site.  The site will include retail with no alley access only pedestrian access with green roofs everywhere possible. 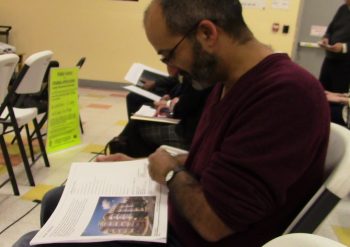 The materials have been selected and approved using standard brick for wonderfully detailed masonry building with stone bases proportional to the houses of the Northwest side of the site.  “Can you let them know how many units will be in this building and how many parking spaces per unit?,” asked Commissioner Lewis.  Jessica Bloomfield from Conde’ Nast stated that the plan was consistent with the approved Planned Unit Development Process (PUD).  The approved PUD has between 85-95 dwelling units, with 41 parking spaces.  “Are any of those units affordable housing?,” Commissioner Lewis asked.  Ms. Bloomfield suggest that the approval is in compliance with the zoning regulations and 8% of the units being affordable.  This is based on floor area square footage.

“What’s the status of the environmental cleanup?,” asked one Commissioner.  The site will be dug up so most of the contamination will be taking out doing construction, according to the representative.  They also plan to dig 18-20 feet deep.  Another question was “who is the owner of the property?”  Joe Manor according to the gas station representative.  Commissioner Thomas opened the floor for questions from the community and one concern was “are they going to be accepting vouchers for low-income families?”  As long as they have gone through the Inclusionary Zoning program and have a voucher, but the I Z program is required for approval with AMI at 80% according to the project development team. “Has the community benefit package changed since your changes?”  According to the project team, “no it hasn’t changed.”  Before the team could wrap up their presentation another resident stood up to ask “what’s the purpose of this presentation today?  It’s just to do what?”  Commissioner Lewis replied, they asked the ANC to present before the project development team goes before the HPO.  She was not under the impression any votes were going to take place at Tuesday night’s meeting.  The developers will present before the Bloomingdale Civic Association with anticipation of a vote.

Keeping in accordance with the agenda items, Sunset Liquor has requested modification of the settlement agreement.  Commissioner Lewis received a request from the owner of Sunset Liquor to extend the hours of operation on Sunday’s from 12 pm until 6 pm.  “Is the owner here?,” asked Commissioner Lewis.  No owners were present at the meeting, however there were residents that lived in the community present.  “My property is adjacent to the rear of Sunset Liquor and had the opportunity to talk to other neighbors who are opposed in the increase in hours in order to maintain our current quality of life,” stated one resident.  They expressed there are four liquor stores within 1/2 mile radius of Sunset Liquor.  According to the resident, Sunset Liquor is the only liquor store that is located right next to residential property.  The other liquor stores are near commercial property.  The residents believe with maintaining their current hours they can maintain their quality of life and are against the increase in hours.

Another concern coming from the community is that the liquor store is across the street from a park, however the Bates Civic Association did approve the extension of operating hours on Sunday.  One resident event did a Google search to check the liquor store hours, and Big Ben Liquor hours of operation are 10 am until 10 pm on Sunday’s.  They are opposed, because with the simple fact the owner couldn’t take the time or care to be at the ANC meeting.  The discussion has been tabled until next months meeting.  Meeting adorned.

Enjoys the Art of Living and Creating compelling content for years to come.

Around The CityNews & Politics

Much like the representation of color we reported on in the alt-right rally in Freedom Plaza (If you think alt-right means alt-white, think again!) stood out, chants of “F- – – 12, F- – –...