One of the topics that received a fleeting mention at the March 12th ANC 5d meeting was the congested area known as Dave Thomas Circle, the intersection of New York and Florida Avenues and First Street in Northeast D.C. It is easily one of the most congested intersections in the city. Southbound traffic on Eckington Place, heading towards Florida Avenue, is often backed up by eastbound traffic from Florida Avenue competing with westbound traffic from First Street all trying to converge. Sound like cluster? It is and at the heart of it all, Wendy’s restaurant. 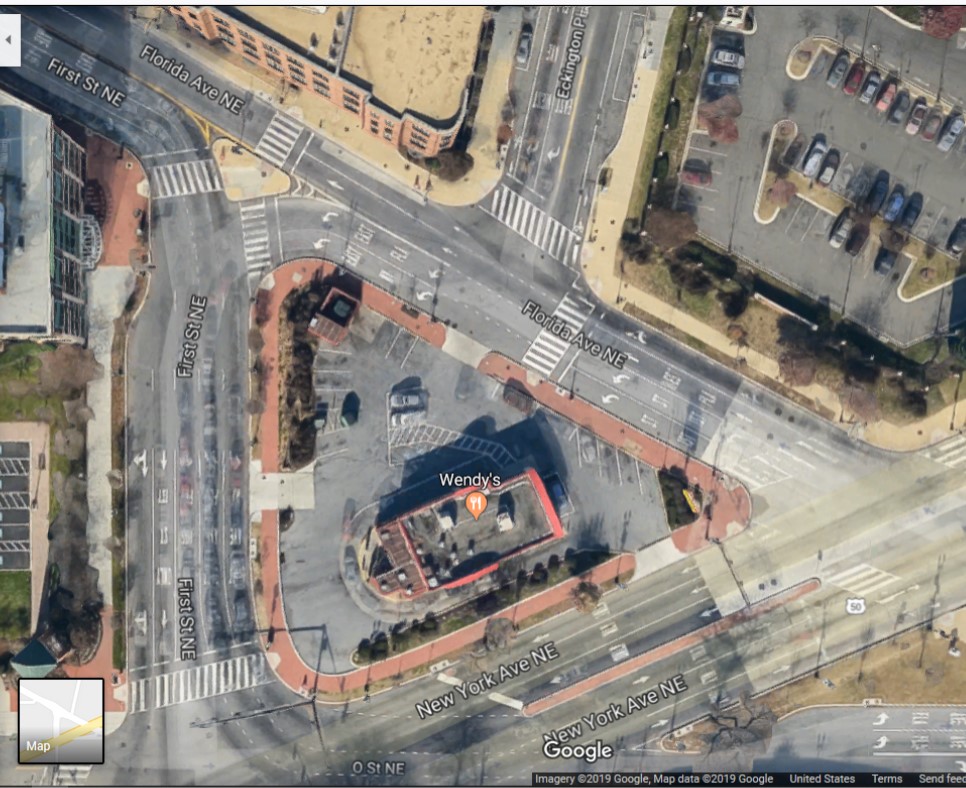 Councilman McDuffie recently requested that the property be seized through eminent domain in his February  28, 2019 Letter to the Mayor. The Councilman states that “For decades, the intersection of Florida Avenue and New York Avenue, commonly referred to as “Dave Thomas Circle” has posed a traffic nightmare for residents and visitors alike. It is no secret that this is a failing intersection that is unsafe for pedestrians, cyclists, and motorists. Therefore, I am requesting funds to cover the cost of eminent domain, engineering, and final design phases that addresses pedestrian and bike space and slowing automobile traffic on New York Avenue.”

The key words in the code are “that property cannot be acquired by purchase from the owners thereof at a price satisfactory to the officers of the District authorized to negotiate for the property“.

The term rose its head again at the March 20 ANC 5C  meeting with respect to the Waste Management Transfer Station on W Street N.E. Nolan Treadway, Communications Director for Councilman McDuffie, stated that the Councilman was seeking eminent domain to seize this property. When asked what the Councilman’s intent for this space Treadway stated that the final plans had not been provided. This drew speculation from the Chairperson and several residents that the property was going to be used as a storage facility for government vehicles. Treadway said he would get back to the Commissioners on the Councilman’s plans.

Eminent domain is not limited to commercial property. In fact, it’s part of the Property Acquisition and Disposition Division (PADD) of the DC Department of Housing and Community Development. Its mission is to “stabilize neighborhoods by decreasing the number of vacant and abandoned residential properties in the District, and transforming vacant and/or abandoned residential properties into homeownership opportunities or District residents at all income levels.” DCHD’s website goes on to site that it can use eminent domain to “acquire such properties through negotiated friendly sale, eminent domain, donation or tax sale foreclosure when owners are unwilling or unable to maintain them.”

Although there is no evidence that eminent domain is going to be the tool to seize properties at will by the government, a word of caution and oversight should be observed. In a city expanding in all areas and transforming under our noses, it might become a weapon of choice to transform areas that might not pose as much blight as they appeal to a developer’s whim.

Around The CityNews & Politics

Much like the representation of color we reported on in the alt-right rally in Freedom Plaza (If you think alt-right means alt-white, think again!) stood out, chants of “F- – – 12, F- – –...