The DC Voice salutes the small businesses in and around the District; brick and mortar, online, old and new. Anyone that’s taken the shortcut on 26th Street N.E. to get to 24th or Evarts streets has at one time or another seen a congregation around a huge smoker and Andrew Majett. We caught him preparing for a long day ahead at the 27th Annual Giant National Capital BBQ Battle “America’s Food & Music Festival” on Pennsylvania Avenue.

I started barbecuing more than 35 years ago when I began hosting an annual cookout for the loyal clients of my hair styling studio. That’s also when I built my first grill – gas-fired, all stainless steel — which I needed so I could feed everyone. I still sometimes use that grill or two others I built, but these days I generally use my two wood-fired smokers. Like my first grills, I designed and built the smokers with the help of friends, and mount them on a trailer I also built. It’s now known as the Mothership.

I first learned to cook from my grandmother, who was from Appomattox, Virginia. One of my favorite uncles let me cook as much as I wanted, and I learned a lot from my many aunts.

I’ve created my own spice recipe over many years – getting ideas from talking to other people who barbecue and experimenting a lot. I’ve learned through trial and error how different spices react to different types of heat – the intense heat of a grill versus the slow cooking of a smoker. I don’t use sauce on the meat I barbecue, just spices and the cooking process. Of course, as with all cooking, excellent quality ingredients are the essential starting point. 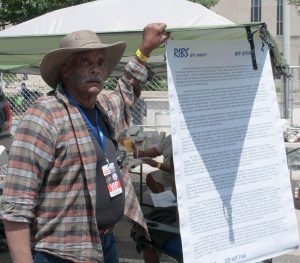 The annual cookouts continued for my clients until I closed the hair studio in about 1985, and turned to woodworking, my first passion. I continued to have annual cookouts for my family and friends for several years, and periodically cooked for events and street festivals in Washington, such as Adams Morgan Day.

I entered my first National Capital Barbecue Battle in 1999. The organizers had invited me in 1997, after my daughter met them and boldly suggested that my ribs were better than any entered in the 1996 competition. I didn’t sign up when they first asked me.  Instead, for two years I just observed what competitors did during the Battle, and worked to design and construct my first smoker (until then I’d only cooked with gas). I finished that smoker just in time for the 1999 Battle, and used it there for the first time.

By 2002 I mastered the smoker and my recipe, and placed second in the chicken contest. I also competed in the first Richmond, Virginia Barbecue Battle. In 2003, the National Capital Barbecue Battle awarded me the Maurice Evans Spirit of Barbecue Award, and I won fourth place in pork shoulder in the Richmond Battle. In 2005, I won first place in chicken in the National Capital Barbecue Battle, and in 2007, I won sixth in its whole hog competition. In 2013 I received the Waker Foundation’s first of its kind Best Chef award.

In addition to entering these contests since 1999, I’ve catered events ranging from small groups of CSX railroad workers, to block parties, graduation and birthday parties, and other gatherings where people come together around food. After Hurricane Isabel, I cooked for a block party hosted by the Mayor of Kensington, Maryland for everyone in the town. On July 25, 2003, a Washington City Paper article described a cookout I donated to a local youth organization.

Some of my favorite events over the years have been for the Military District of Washington. They’re especially meaningful because I’m an Army veteran, serving during the Vietnam War era. For nearly six years, I cooked for an annual picnic of Army Community Services personnel and volunteers at Ft. Myer, Virginia. After the September 11 tragedy, I approached Major General James Jackson, Commanding General of Ft. Myer and the Military District of Washington, about donating my services for the soldiers under his command who suffered because of the Pentagon attack. I catered a get-together he hosted to thank the soldiers who replaced those who were killed. In 2004 General Jackson sent me his personal thanks for the support I provided during his three-year command, and in 2005 the MOW Command Sergeant Major presented me with his Award for Excellence.

In the last few years, I’ve appreciated the opportunity to participate in several memorable events in Virginia. In 2017 Albemarle CiderWorks invited me to be a vendor at their annual Apple Harvest Festival in North Garden. In 2018, Craig Hartman featured the Mothership at his BBQ Exchange restaurant’s annual Porkopalooza festival in Gordonsville. And in 2018 I also cooked for The Generals’ Quarters Restaurant in Locust Grove when it provided food for a local car club’s “cruise-in.” Since I love cars this was especially fun!

The fish were flying in Bloomingdale’s breeze.

I want to donate to keeping The DC Voice alive!